The Royal Mint launched a unique series of coins in 2016, known as the Queen’s Beasts. Statues of the Queen’s Beasts were present at the historic occasion of the coronation of Queen Elizabeth II, Britain’s current and longest-reigning monarch. The event took place on the 2nd of June, 1953 at Westminster Abbey in London. The coins were minted in silver and gold. There are 10 planned coins in the series, featuring stylised images of each of the Queen’s Beasts statues from the 1953 ceremony. The designs of the coins were developed by Jody Clark. The series is significant, as it is the first time that the UK has issued a two ounce silver coin, which forms part of this series. In this article, we will explore each coin in detail. 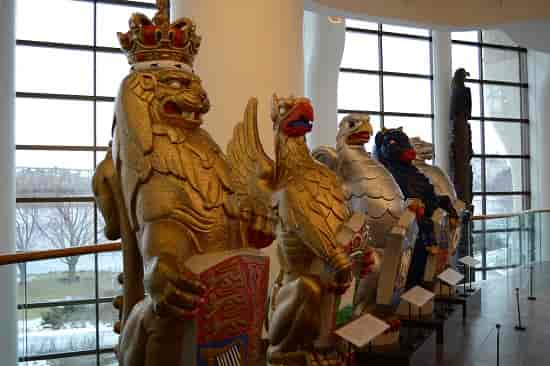 The Lion of England

The Lion is the first in the series that was inaugurated in March 2016. The issue was completely sold out on allocation. A further mintage was issued by mid-June 2016. The coins were delivered to investors packed in a protective plastic capsule. The obverse of the coin displays a portrait of the Queen, similar to the ones issued on other coins. The obverse also contains the inscription ‘Grace of God, Defender of the Faith’, written in Latin. This is displayed in an abbreviated form with the letters DG REG FD. The initials of the designer, Jody Clark are also inscribed. The reverse is the side that features the stylised version of the crowned Lion of England. The reverse also shows the name of the statue, the fineness of the coin, the year of issue and the signature of Jody Clark.

The Griffin of Edward III

The Griffin was issued in November 2016 and is the second coin in the series. Once again, the obverse features a portrait of the Queen and the initials of the designer. The reverse has the stylised image of the statue of the Griffin, along with the inscription, ‘Griffin of Edward III’. The text also indicates the fineness, year of issue and the signature of the designer.

The Red Dragon of Wales

Riding on the success of the first two issues,

the Royal Mint issued the third coin in the series by March 2017. While single orders were always sent to buyers in a protective plastic capsule, bulk orders were despatched in containers used by the mint for its hugely popular Britannia bullion coins. With the portrait of the Queen on the obverse, the Red Dragon of Wales, a mythical beast is featured on the reverse of the coin, once again with its name, fineness, year of issue and the designer’s signature just below the shield.

The Unicorn of Scotland

The fourth release of the series came in September 2017. In doing so, the Royal Mint skipped a release in March earlier in the same year. With the obverse, identical to the other coins in the series, the only difference was the finish. The earlier coins had a stucco style finishing for the obverse, however, this time the finish featured an arched pattern of several tiny diamonds.

The reverse of the coin features an image of the Unicorn of Scotland along with similar inscriptions and the initials of Jody Clark, the designer. 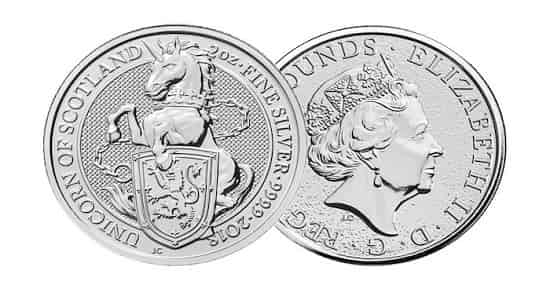 The Black Bull of Clarence

The fifth in line of the Queen’s Beats series is the Black Bull of Clarence, which was issued in March 2018. The obverse is the same as the other coins and the reverse features an image of the black bull, with the other inscriptions similar to the earlier coins in the series.

The White Horse Beast celebrates the rule of King George I, the first monarch from Hanover to rule Britain in 1714. His ascension to the throne came as he was the closest living Protestant relative to Queen Anne. He was the grandson of Elizabeth Stuart, sister of Charles I, and in fact ruled the whole of Britain, France and Ireland. The Haus Hanover lineage stemmed from the House of Brunswick-Luneburg, rulers of the pre-republic Duchy of Brunswick.

Falcon of the Plantagenets

The reverse of the coin features the impressive Falcon of Plantagenets design, The falcon perches on a shield depicting another falcon sat on a fetterlock. Representing the House of Plantagenets, the falcon has long been a heraldic symbol of not on this famous royal house but also houses of York, Lancaster and Tudor.

Like many of the 10 heraldic beasts, the Yale of Beaufort is a mystical beast with a number of slightly varying interpretations of the fable. The generally accepted parameters are that the Yale is a goat-like creature which boasts incredible powerful horns which can pivot in any direction for combat. It also possesses a set of boar-like tusks. The back of this 1oz coin features the legendary Yale of Beaufort, proudly astride a shield with crown and chained portcullis. The wonderfully detailed main image pops out even more as it sits on a dimpled background, adding depth. Around the edge of the image is the wording ‘YALE OF BEAUFORT’, coins weight ‘1oz’, ‘FINE GOLD’, purity ‘999.9’ and finally the year of issuance.

Not to be confused with the Lion of England emblem, also celebrated in the Queen’s Beasts coin range, the Lion of Mortimer features no crown and its tongue and claws are blue rather than red. Originally inherited from his grandmother, heiress of the Mortimers, it was Edward IV (1461-1483) who first used the Lion of Mortimer in the Royal Arms. Representing his House of York, the Lion design holds a blue shield with white rose on a golden sun. The symbol has since been favoured by King George VI, Queen Elizabeth’s father.

The White Greyhound is associated with the Tudor era, in particular Henry VII and his father Edmund Tudor. The Greyhound symbolised the Honour of Richmond, which Edmund used as Earl of Richmond.

The coin celebrates the success of the 10 beast series by featuring each of the previous beasts surrounding and protecting Queen Elizabeth, as the original statues were designed to do.

As with the core 10 beasts, the Completer coin is issued in the 1oz Gold version and the 2oz Silver bullion coin.

Call us to know more about investing in precious metal coins

Our investment experts include numismatics specialists who can guide you on the right ways to buy gold and silver coins. Bullion coins can be an excellent investment, whether you’re an investor or a keen numismatist. Queen’s Beasts coins are available at Physical Gold and come with a certificate of authenticity. Dial 020 7060 9992 to talk to a member of our team, or email us to avail of the right advice in buying gold and silver coins.