The American Silver Eagle is one of the most prestigious coins to be minted in the US. The coin is a relatively new one, having been released in 1986. This makes the first edition of the coin only a year older than the gold Britannia. The US Mint released the silver Eagle with one Troy ounce of silver that has a purity of 999.9. The coin was released with a face value of one dollar.

Interestingly, ever since the American silver Eagle has been released, the designs have never changed. Unlike the silver Britannia, the coin is presented in the same style, look and feel and the only difference from one coin to the other is the respective mint mark, which is found on the reverse of the proof coins. Well, the coin enjoys healthy interest from investors, and we want to find out whether the silver Eagle is worth its salt as an investable coin. 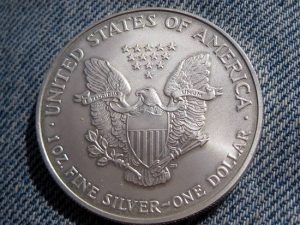 The American Silver Eagle coin known across the world as a liquid coin.

In terms of divisibility, the silver Eagle does not offer much choice. As discussed above, the coin has always been available in the same size, shape, and design. However, there are some variations in its design that can add to the variety of an investor’s silver portfolio. The obverse of the coin features an image of Lady Liberty, created by the designer Adolph A. Weinman. Apart from the famous image of Lady Liberty, the obverse of the coin also features the American national motto – “In God we trust”.

The reverse of the coin carries the image of the Heraldic Eagle. Right above the head of the bald eagle, there is a cluster of 13 stars, each of which represents one of the original colonies of America, at the time of its founding. The only design change for the American Silver Eagle was in 2021. In the new 2021 design, the bald eagle on the reverse of the coin is featured flying back with its wings spread out. So, this is perhaps the only element of variety that an investor can hope for when investing in the American Eagle. The 2021 design commemorates the 35th anniversary of the coin, and the US Mint has taken this opportunity to refurbish the design of the coin.

The American Silver Eagle is a famous and well-known coin across the world. This ensures the liquidity of the coin and the coin can be easily cashed in at any point in time, bringing in cash as you need it. Previous editions may command a premium due to increased numismatic interest. American Eagle coins are available in uncirculated, proof, and burnished versions, giving a certain amount of choice to investors. Being a well-known coin, the coin has a good chance of being sold for its value in a short period. 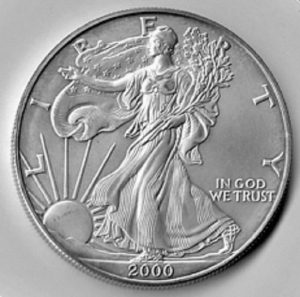 The obverse of an American Silver Eagle – the year 2000

Silver Eagles can provide a good medium to long term investment and balance to other assets. The 1oz coins afford high flexibility to sell small parts of the silver holding compared to owning huge silver bars. The mass-produced coins are relatively cheap compared to collectors’ coins and their value can rise along with the underlying silver price and age of the coin. Many analysts feel the silver price is very undervalued, suggesting holding silver Eagles will benefit the investor in the long run.

Talk to the coin experts at Physical Gold

One of the country’s most reputed and well-known precious metal dealers is Physical Gold. Our advisors are always happy to discuss your silver coin purchases with you and can offer valuable advice. Get in touch with us on (020) 7060 9992 or simply drop us an email by visiting our website.