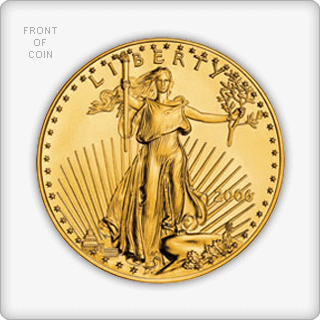 The American Eagle coin is a legal tender gold bullion coin of the United States and is an easy, convenient and affordable way to add to your gold portfolio. Authorised under the Gold Bullion Coin Act of 1985 the Eagle was first issued one year later with a face value of $50 USD. The American Eagle coin is the only gold coin whose quality and purity are guaranteed by the U.S. government. The US law dictates that the gold contained within the coin must come from sources in America.

Offered in 1/10 oz., 1/4 oz., 1/2 oz., and 1 oz. denominations, these coins are guaranteed by the U.S. government to contain the stated amount of actual gold weight in troy ounces. By law, the gold must come from sources in America, alloyed with silver and copper to produce a more wear-resistant coin.

Find out the secrets to achieving the highest selling price for your gold coins. Download the FREE pdf

The design of these coins is exactly the same as the one-ounce coins, except for the weight and value markings on the reverse. The series issued between 1986 to 1991 of the Gold Eagle has dates written with Roman numerals. However, this practice changed from 1992 onwards, and Arabic numbers were used to date Gold Eagles.

While these coins are generally accepted as legal tender by the US government, the intrinsic values of these coins are much greater than their face values. For example, the 2012 value of a $50 face value coin was as high as $1,835. Of course, these prices are heavily influenced by both market demand for the coins as well as the spot prices of gold.

It is important to note that the American Eagle coin is also available in silver. The silver versions of these coins are produced by three mints – Philadelphia, San Francisco and West Point. Featuring designs on its front and back by Adolph A. Weinman and John Mercanti respectively, the silver eagle remains a popular choice for coin buyers across the world. The first Silver Eagle was created in San Francisco in 1986 and rose to popularity ever since.

In order to commemorate the 25th anniversary of the Silver Eagle, the US Mint circulated a lacquered presentation set that contained five coins, one proof coin and one uncirculated coin from West Point, along with many other valuable Silver Eagles from different locations across the US, where they were struck.

In a recent development, the US Mint has announced that the American Eagle would now be available in palladium. This is the fourth metal that the American eagle would be available in, the earlier three being gold, silver and platinum. It would be the first-ever palladium coin to be issued on US soil. The coin has attracted global interest and has already notched premiums, well in excess of its face value.

The obverse side of the coin features a rendition of Augustus Saint-Gaudens Lady Liberty with flowing hair, holding a torch in one hand and an olive branch in the other. The reverse of the coin features a design by sculptor Miley Busiek of a male eagle carrying an olive branch to his family. The motto, “In God We Trust”, appears to the right of, and beneath, the eagle’s wing. This motto has featured on all U.S. gold coins since 1908.