Home / Insights / Gold Hallmarks – A Guide to Hallmarking of Coins

Gold Hallmarks – A Guide to Hallmarking of Coins

Gold coins are extremely popular amongst investors and collectors. However, coins, bars and other articles cannot be manufactured using gold in its purest form. This is because gold is a soft and malleable metal and may bend easily during the manufacturing process. So, it needs to be mixed with other metals to achieve a certain level of hardness. Other metals are also mixed with gold to create colours which are popular among buyers.

But how do we know the extent to which other metals have been introduced into the gold? It would reduce the purity of the gold to something like 18 carats. But, it is impossible to ascertain the purity with the naked eye. Therefore, gold hallmarks are required to inform the buyer about the purity of the gold. These gold markings are engraved on the gold by the manufacturer. 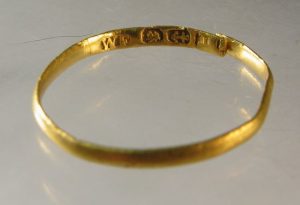 A ring with visible gold hallmarks

Standard gold hallmarks will carry a number. For example, 18-carat gold is 750 parts out of 1000 in weight. So, the gold markings will carry the number 750.

Gold hallmarks were introduced in the UK as early as 1300. At the time, a law was passed regarding the purity of gold items. By this law, gold had to be 80% pure, which meant that it must be 19.2 carats. Under the act of gold hallmarks, gold products were tested by the guardians of the craft, who used a stamp with the leopards head, as a symbol in their gold markings. Later, the task of testing and adding gold hallmarks was assigned to assayers, based in Goldsmiths Hall, London. Currently, assaying offices can be found in London, Sheffield, Birmingham and Edinburgh.

By 1972, the UK joined the International Convention of Hallmarks as a signatory. This convention introduced new gold markings, commonly referred to as CCM (Common Control Mark). The fineness of gold is therefore represented in gold hallmarks as a weighing balance with the purity number written in between. In 1999, the European Court of Justice ruled that dealers in the UK would have to recognise and accept the gold hallmarks of other European countries. These gold markings must carry the maker’s symbol, purity information and the stamp of an assaying office. Currently, the UK recognises the gold hallmarks of Switzerland, Finland, Denmark, Ireland and Portugal. 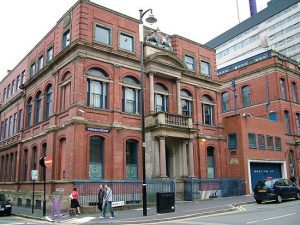 What should we look for in gold hallmark identification?

Gold hallmark identification is an essential step in ensuring that the gold you purchase is genuine and contains the purity of gold that you are paying for. If we go back in time, gold hallmark identification had five separate elements. These included the mark of the maker, information related to fineness, millesimal fineness, the mark of the assaying office and the date.

However, there were discrepancies in the dates across these gold markings. For example, the initial issuers of gold hallmarks – the ‘Worshipful Company of Goldsmiths’ started each year on St Dunstan’s Day, which is 19th May. During the reign of Charles II, this was changed to the King’s birthday. In more recent years, the different assaying offices used the start of their financial year. In 1975, the start dates for all gold hallmark identification were brought to the beginning of the calendar year. Today, the date stamp may be omitted altogether from gold markings.

Download the FREE cheat sheet to buying gold and silver for investment.

So, when studying gold hallmark identification, we would find three essential identifiers – the mark of the maker, the standards/fineness mark and the mark indicating the assaying office. The assaying office in Birmingham is considered to be the largest and its symbol is a ship’s anchor on its side. 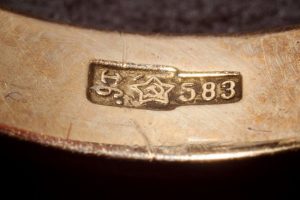 Gold hallmark from the Soviet Union

Gold coins come under the category of investment-grade gold in the UK. This category of gold is exempt from the law of displaying gold hallmarks. This is simply because the purity of investment-grade gold is guaranteed by the London bullion market Association (LBMA). No gold hallmark identification is required. The assaying office in London has also published its guidelines regarding gold hallmark identification, which states that gold coins are exempt. However, refiners will often stamp their gold bars with their mark and purity information. Likewise, mints may also stamp their gold coins with identification marks.

For example, the Royal Mint issues a gold coin set known as the Tower of London collection. This set of coins carries a special mint mark. These gold markings can be used to identify the coin over the years to come, tracing it back to its origins and the mint that has struck the coin. Similarly, US gold coins also carry mint marks. These mint marks are engraved to identify where the coin was made and hold the manufacturer accountable for the purity of the coin. In 1835, mint marks were introduced in the United States by law. In 1838, the first mint marks appeared on US coins from the newly opened branches of the US Mint in Charlotte, Dahlonega and New Orleans. Similarly, gold sovereigns were produced across the British Empire. These coins have a mint mark with a letter, indicating the city or country where the coin had been minted. However, gold markings such as mint marks should not be confused with gold hallmarks.

At Physical Gold, our gold experts can help you find out more about gold hallmark identification for gold products. We can advise you and guide you on your purchase of coins and bars, including the process of finding out about the purity of articles you buy. Call us today on (020) 7060 9992 or get in touch with us online and we would be happy to help you out.