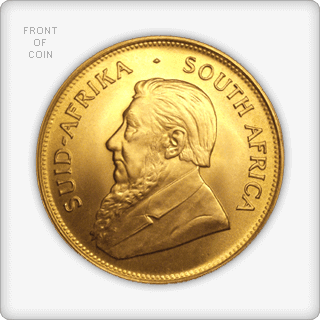 The Krugerrand is the 22-karat bullion coin of South Africa. It was the first gold coin produced to contain precisely one ounce of fine gold, and provided a vehicle for the private ownership and trade of gold. By 1980 the coin accounted for 90% of the gold coin market. The success of the Krugerrand led to many other gold-producing nations minting their own bullion coins.

Sell your gold coins at the highest price. Find out how…

With over 54 million Krugerrands in circulation it is believed to be the most widely owned gold bullion coin in the world. The sheer number of coins on the market coupled with the coin’s global recognition, mean it is one of the least expensive coins to buy. The intention for the Krugerrand was for it to be circulated as currency, for this reason the coin was minted in 22 karat gold, with copper as a strengthening alloy. Its durability is one of it’s main selling points now. With one of the most active secondary markets of any gold coin, the vast majority of Krugerrands we see of 30-40 years of age are still in fantastic condition.

Due to the huge number in circulation coupled with it’s global recognition, the coins provide unparalleled liquidity. As an investment into a physical asset this is very important. Just like when buying and selling a house, it is not only the price you manage to purchase the property at, but also the sale price which will determine your profit. If you buy a house at a great price but it’s on a main road and appeals only to a very niche market, then it is more difficult to sell and the eventual sale price will inevitably be affected. The same goes for gold. Buy Krugerrands and you’ll be able to sell the coins at any time, maximising your chances of securing a good price.

Despite the coin’s legal tender status, the coin was illegal to import in many Western countries during the 1970s and 1980s due to economic sanctions against South Africa for its policy of apartheid. In 1994 these sanctions ceased when South Africa dropped this policy.

The coin is so named because the obverse features the profile of statesman Paul Kruger, four-term president of the old South African Republic. The reverse displays one of the national symbols of South Africa the springbok which is the African name for an antelope.

There have been more than 50 million of the coins minted since its first minting in the sixties – more than all other bullion coins combined. It is one of the most well known gold products in the world, thanks to its liquidity and status it brings to the owner.

Before the introduction of the coin, gold was only available in bars, making it too expensive for some. As the Krugerrand has legal tender status, the UK is allowed to import it without paying import taxes, duties and VAT – making the Krugerrand cheaper to buy.

Because of their wide circulation, the liquidity is better than any other gold coin. This makes it much easier to sell the coins whenever you want to cash in on your investment and still receive a good price for it.