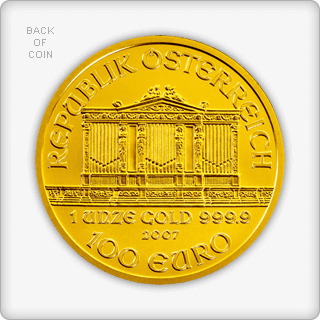 The Austrian bullion coin is called the Philharmonic gold coin and was fist issued by the Austrian mint in Vienna in 1989.

The Philharmonic coin is 24 karat gold and has a current face value of 100 Euros although Philhamonic’s produced between 1989-2001 had a face value of 2000 Schillings. This coin had the highest value of any gold bullion coin when it was denominated in Schillings.

Find out the secrets to obtaining the highest price when selling your gold coins. Download our FREE pdf

The coin started trading on 10th October 1989 and two versions were made available. The first version was a one-ounce coin and the second, a quarter ounce. Subsequently, newer versions were released in 1991 and 1994. These were one-tenth and a half ounce version respectively. When we compare these coins, we can see that they are identical except for the weight and face value displayed. Then in 2014, a one twenty-fifth ounce coin was also released with a face value of 4 euros at the time.

According to the World Gold Council, the Austrian Philharmonic was the best selling gold coin worldwide in 1992, 1995 and 1996 and has proved a popular choice for those wishing to add 24 karat coins to their portfolio. True to its reputation as one of the best-selling coins of all time, 14 million Austrian Philharmonics were sold since its release in 1989 till 2012. This incredible number actually weighs around 329 tons of gold if put together.

The obverse displays the great organ in the Golden Hall in Vienna’s Musikverein, the concert hall of the Vienna Philharmonic Orchestra, date of issue, and face value in Euros (prior to 2002 in Schillings)

The reverse of the coin features a design of musical instruments representing the Vienna Philharmonic Orchestra, as well as the text Wiener Philharmoniker.

The Austrian Mint has a long history, first appearing in records as early as 1371, at the time referred to as the Vienna Mint. Having gained importance as the country’s principal mint in 1715, it released one of the most famous coins ever issued, as early as 1741. This was a silver coin called the Maria Theresa Thaler, named after Maria Theresa, the Holy Roman Empress who ruled till 1780. Upon her death, these coins ceased issue. The Vienna Mint rose to prominence as the national mint of the country post World War 1, as Austria became a republic. It was only in 1989 that the name formally changed over to the ‘Austrian Mint’. Around the same time, it was incorporated as a public limited company, as a subsidiary of the country’s national bank. The Mint continues to be one of the most important issuers of gold and silver coins that enthral collectors and investors around the world.