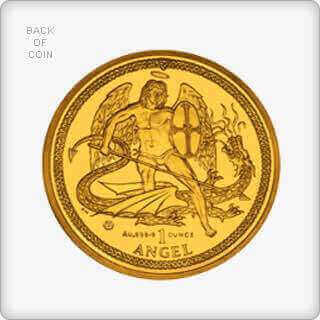 The Angel coin is a lesser-known UK bullion gold coin issued by the British Pobjoy Mint in the Isle of Man. Well regarded for its beautiful depiction of the Archangel Michael slaying the dragon on its reverse, this coin appeals to collectors and investors alike.

Based on the French Angelot coin, it was originally minted in England under Edward IV in 1465. Rumour has it that the coin was thought to bring healing powers to those suffering from the disease scrofula or the ‘King’s evil’.

Nowadays, it’s seen as a viable 24 carat alternative to the Royal Mint’s 1oz Britannia coin, offering the same tax-free status due to its recognition as legal tender. Despite this, they remain less popular and less liquid than their Royal Mint counterparts. Certainly welcome as part of a mixed tax-free portfolio.