Take a look at the dollar price chart here, and what do you notice Do you see a particular pattern 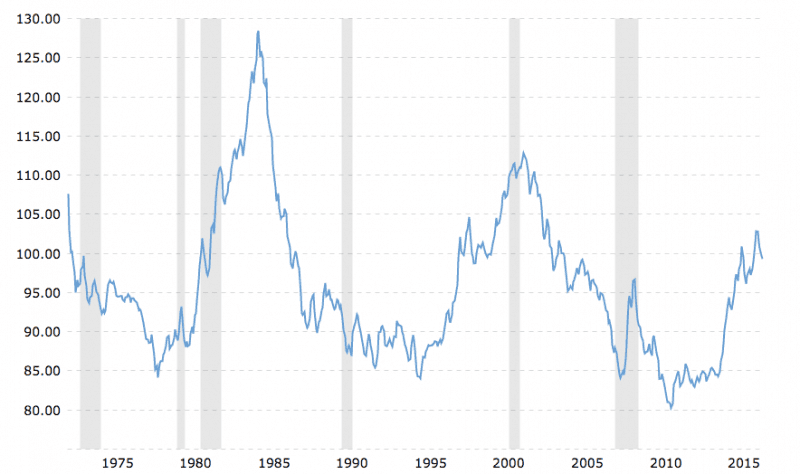 Since 1975, the dollar climbs for approximately five years, then catastrophically crashes.  Look closely at the last few years…the dollar has been climbing since 2010.  Based on historical data from Macrotrends, this chart shows a cyclical pattern and experts at Scottsdale Bullion, in the U.S, are predicting a MAJOR dollar crash is on the horizon, and we’re inclined to agree.

Following continual gains over recent years, their opinion is that in 2017 or 18 there is going to be a MASSIVE DOLLAR DROP!  That means that now, more than ever, you need to take action to protect your wealth.

The Independent recently wrote that President Donald Trump will wreck the world economy and it seems that this prediction is supported by many of the world’s financial advisors.

David Marsh is a UK based Senior Asset Management Advisor. He’s also in agreement and predicting a massive dollar collapse – similar to what we saw back in the 80s.

Protect Yourself in the UK

You can protect yourself from a dollar crash by diversifying into different asset classes to reduce your overall investment risk.  Experts generally advise holding between 10 – 15% of your overall portfolio as Physical Gold. This is because gold tends to go up when everything else goes down – giving investors protection against geopolitical events, uncertainty and inflation.

You may think that this isn’t such as great idea as gold has been quite volatile itself recently, but you wouldn’t think twice about insuring your car or your home, so why not insure and protect your assets

After a Dollar crash, what would happen

In the U.S inflation would rise, unemployment would suffer and interest rates would be sky high.  This could send the USA back into a deep recession. Investors would flock to other assets; such as commodities and gold, or other currencies such as the Euro.  Globally, there would be continued substantial economic turmoil.

And without a doubt everyone would agree that here in the UK, we’re already experiencing a period of extraordinary political uncertainty.  A dollar collapse would add further insecurity, and to counter this kind of turmoil, you must think ahead. Keep your assets liquid and diversified so you can shift them as needed.

But haven’t the Fed just put up interest rates

Yes. Interest rates were increased to 1.25% by the Federal Reserve on 14th June 2017. Chairperson, Janet Yellen cited an improved jobs market, with the unemployment rate down to its lowest in 16 years.

This was the third quarterly rise in US interest rates and more importantly, the Fed intend to continue raising rates and unwinding their vast Quantitative Easing (QE) program. The open market committee expects rates to increase once more in 2017 and a further two times the following year.

All seems well then….

On the surface, this sounds great. Starting the process of buying back the Government issued bonds which make up the giant QE program, and an economy which seems to be steadily growing.

However, the committee aren’t unanimous in this optimism. Neel Kashkari, tipped as a future chair of the Fed, objected and warned against increasing rates, for fear of damaging the fragile recovery.

The economy is in a delicate state, which can easily be tipped into catastrophe. Already, the average American’s monthly mortgage costs have increased significantly over the past year. With further rate increases promised, many will struggle to pay for their homes. Certainly, the public will have less disposable income to spend on goods and services which could put a massive crimp on the very spending which the QE program was designed to encourage. With the Fed re-purchasing bonds to unwind the program, the equation could well have a huge negative impact on the growth of the economy.

Stronger Dollar in the short term

Increasing the US interest rates will initially strengthen the Dollar, but the medium term impact could push the US back into recession. The economy is more globalised then at any point in history.

A strong Dollar means US exports are increasingly expensive for the likes of the UK, Europe and Asia to buy. With Brexit in full swing, the UK lacking a majority Government and China’s economy slowing to a halt, the Fed may be underestimating quite how fragile the global economy is. An initial rise in the Dollar could well spark a massive fall in Exports and start the Dollar crash cycle once again.