Home / Insights / How might the US election affect your family’s wealth?

How might the US election affect your family’s wealth?

Whilst it may be tempting to amuse ourselves in the UK by watching the heated TV-debates between Hillary Clinton and Donald Trump, should we really be so relaxed? Surely this US election fever over the pond won’t affect our savings and investments. We take a look.

How can the US election impact me and my wealth?

In today’s hugely globalised economy, it’s inevitable that a major event somewhere in the world will impact the rest of the global economy. When that place is the worlds largest economy, the impact can be far more severe than usual. Any volatility in US markets could have both a direct and indirect impact on your investments. Many UK funds, whether equity ISAs, pensions or managed funds, will invest heavily in US stocks. Even more worryingly, the UK companies comprising the FTSE 100, derive almost 70% of their income from overseas. A large proportion of it from the US.

How exposed is your family to a market downturn? Take our FREE test to find out

Its very common for US markets to suffer volatility in the weeks and months leading up to a US election. Markets hate uncertainty, so the closer the race, the less sure the market is of the outcome. The unpredictability of Trump, with no track record in politics and extreme views, means the markets are also unsure and scared of what a Trump victory would bring. It would be a journey into the unknown.
The fact that neither candidate is pulling ahead clearly, suggests that neither is unanimously popular. The outcome may be the best of a bad choice. Certainly, a Clinton win would likely impact markets less, as she would be more predictable. Meanwhile, a Trump victory could initially send markets south very quickly, but would then likely recover to a degree.
It’s also worth considering the individual sectors in which your money invested. For instance, Trump promises to relax legislation on fracking and emissions, likely leading to a boost for the gas and oil industries. In contrast, Clinton is focussed on supporting green energies. Both candidates are focussing on investing in infrastructure, so we may see a short to medium-term rise in building stocks.

How can you prepare for the result and protect your savings?

Clearly, the key strategy with uncertainty is to spread risk. That way, a fall in one sector, asset or geographic region will be offset by a rise in another. Its also worth keeping a close eye on the election result and the months which follow, to determine if you need to adjust your asset split.
Gold investment plays a key role in providing portfolio balance. Firstly, it tends to perform inversely to the stock markets and the US Dollar. If you purchase physical gold versus electronic gold, you also benefit from owning a tangible asset instead of relying on supposed the value of paper assets.

What are we seeing in the gold market?

After barely pausing for breath after the Brexit decision, the gold market has once again heated up over the past few weeks in preparation for the US election. As the natural safe haven asset, we’ve seen a 42% increase in enquiries in October from the previous month. Just as telling, we’ve observed a theme of investors moving large proportions of their wealth into gold. Their motivation is driven by the worry of a Trump victory and the lack of viable savings account alternatives to beat interest rates. 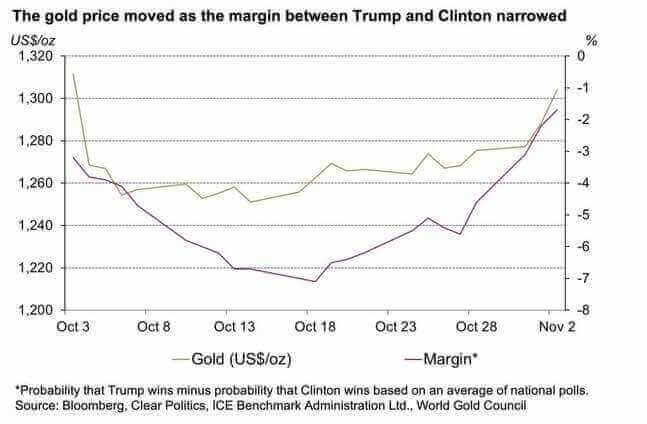 No doubt, the markets fear a Trump victory more than anything. HSBC said this week that a Trump win would add $200/oz to the gold price. Perhaps many of us have convinced ourselves of a Clinton victory. But we must learn lessons from history. The Brexit result earlier this year demonstrates how the unlikely can happen. Poor preparation for that can lead to big losses. Meanwhile, gold holders benefited to the tune of a 15% rise overnight.
The relationship between the US Dollar, the US election and the gold price is nicely illustrated with this chart by the World Gold Council. With investigations into Clinton’s past, Trump pulled ahead in some polls.
Who knows who will win on 8 November. All I know is that I’ve learnt from Brexit. After the credit crunch and global recession, voters are looking for scapegoats and change. I know that balance is the only preparation and gold is still worth investing in.