– World’s purest gold coin and in the Guinness Book of Records for its purity of 99999 fine gold
– Gold coin was legal tender, investment grade, bullion coin and only 7 other coins were minted
– The other ‘Million Dollar Gold Coin’ is still available for sale by GoldCore safely stored in vaults in Ottawa
– Royal Canadian Mint minted the gold coin in 2007 and carries imprint of Queen Elizabeth II
– Like all bullion coins, is worth much more than its legal tender value
– Gold should be stored in secure vaults, in safe jurisdictions such as Singapore, Hong Kong and Zurich When debating whether or not gold has value or not, the naysayers will often argue that it is a “pet rock” and just a shiny, heavy, cumbersome piece of yellow metal that has no “intrinsic” value.

Ignoring the fact that the majority of humanity still know that gold remains great valued. Even daring thieves realise the value of gold and will go to great lengths to get their hands on it.

Yesterday morning German police received a call from Berlin’s Bode Museum saying that one of the ‘Big Maple Leaf’ coins had been stolen over the weekend.

Despite the massive size of the gold coin and huge weight –

it wasn’t too big for thieves and they were more than happy to relieve the Berlin musuem of one of the their prized possessions.

The museum houses one of the world’s largest coin collections, with about 102,000 coins from ancient Greece and about 50,000 Roman coins, so why did they single out this particular one?

Given the vast size and weight of the coin, this clearly was not an opportunistic theft. Reports state that the alarm system was circumnavigated and a ladder onto a nearby rail track was also found. It would want to be a very strong ladder !

Police shut down the local transport system in order to comb for clues. Whilst this is a crime and one that can never be condoned, it serves a great purpose in showing that gold remains greatly valued and highly coveted and perhaps more importantly of the vital importance of owning gold coins and bars in secure vaults in the safest jurisdictions. 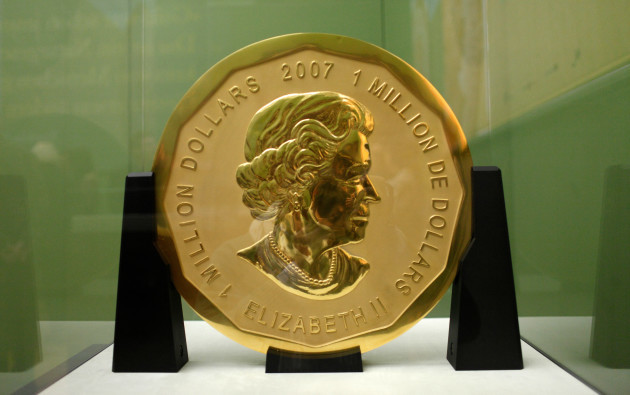 They don’t want the coin

The coin is arguably a collector’s item, but it is unlikely that this is why it was stolen. Thieves had easy access to a 100kg of gold at the highly technical purity of 99.999%. When asked what the thieves would do with the coin, a police spokesman Die Welt: “Either they were hired to do it by someone who wanted to have the coin, but it’s more likely that it will be melted down.”

One of the many reasons we like gold as money is because of its divisibility. It can be melted down, broken into smaller parts. Those smaller parts retain the value of the gold it contains, unlike a diamond which is worth more as a whole rather than broken into fragments.

Gold can be broken up many times over, no matter it’s appearance, it will always be worth the same whether apart or melted into one bar or coin.

The coin with the poker face

The thieves may be keen to melt it down not just because it will make it easier to transport and resell, but because they know that it’s still worth something despite losing it’s current appearance. The face value of the Big Maple Leaf reads CAD 1 million, it is in reality worth around €3.7m, £3.2m or $4m given the value of the total gold content.

We recently wrote about how collectible gold coins should be likely avoided in the majority of situations due to their face value (and later resale value) failing to reflect the underlying metal content or purchase price.

Some mints or private minting companies have a habit of churning out collector coin sets that commemorate certain events or series.

But this is where this gold coin bucks the trend. As explained above, the coin might have a face value of 1 million Canadian dollars, but in truth it is worth significantly more than that, and it has become more valuable (due to its gold content) since it was minted in 2010.

We’re used to the actual value of money not being what we’re told it is according to its face, but it’s rare that the real value exceeds that face value. The 100 kg of the purest minted gold, is worth several multiples of 1 million Canadian dollars legal tender, but the provenance of the coin also contributes significant value to it.

Will you get your hands on the ‘Million Dollar’ Big Maple Leaf?

There are legitimate ways to own the Big Maple Leaf, in fact there are four more versions of the coin excluding the one that is no doubt on it’s way to be melted down. However there is only one that is for sale.

A year ago GoldCore announced that we had been given the exclusive rights in the UK and Ireland, to sell one of the five Big Maple Leaf coins. It is the only one that is currently for sale, in the world.

As we explained at the time, owning one of the extremely rare Big Maple Leaf is the opportunity to own a piece of history. It is a unique opportunity to own not only something is rare in its existence but is “It is a collector’s item and commands a premium both for its gold bullion content but also for being incredibly rare.”

Don’t store your gold in a public place

Whilst this escapade is another example of how gold is money, the main lesson of this is that this amount of gold should not be stored anywhere other than a secure vault in one of the safest jurisdictions.

Very few vaults meet this criteria. Loomis International and Brinks vaults as offered by GoldCore’s partners in secure locations including Switzerland, Singapore and Hong Kong are some of the safest vaults in the world, provided the coins and bars are owned in allocated and segregated storage.

Unlike the Berlin-based museum, the gold bullion you store with GoldCore isn’t there because of a need to show it off and to allow people to admire it. Allocated and segregated coins and bars are fully insured and owned in the name of the client who have outright legal ownership.

Gold is a safe haven asset but only if held in a safe haven manner. It is locked away in the safest vaults to keep it safe and so it is there when you need it to protect your wealth.

Owning the financial insurance that is physical gold is important in these uncertain times.

Owning gold has protected people throughout history and again in recent years. Bail-ins as seen in Cyprus and now enacted in the EU, UK and U.S. may see deposits confiscated in the same manner that the Berlin thieves ‘confiscated’ the gold coin yesterday.

Customer Service
Recent Posts
Categories
We use cookies to help give you the best experience on our site and allow us and third parties to tailor ads you see on this and other websites. By continuing you agree to our use of cookies.OkRead more